A modular residential tower designed by nArchitects that is meant to offer a solution to New York’s  affordable housing shortage is nearing completion.

The building, named My Micro NY, is currently rising on a site in Manhattan’s Kips Bay neighbourhood.

Organised by former New York mayor Michael Bloomberg and sponsored by the city’s Department of Housing Preservation and Development, the competition invited designers to propose micro dwellings that could serve as a new model for affordable housing, particularly for one- and two-person households.

The city is experiencing a boom in luxury housing projects, including a series of super-tall residential towers that are now under construction in Manhattan. Architect Steven Holl took issue with the towers in an Opinion piece for Dezeen, stating that «architecture with a sense of social purpose is becoming increasingly rare» in New York.

On-site construction began in March. The modular units are being stacked and bolted together, along with stairs, an elevator and other shared spaces. The building’s facade will feature four different shades of grey brick, with varying textures. 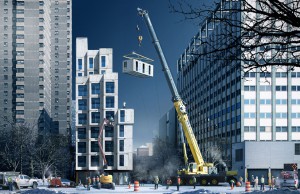 «The project focuses on quality and livability through features that highlight the use of space, light and air,» said nArchitects of the design.

«The city’s housing codes have not kept up with its changing population, and currently do not allow apartments smaller than 400 square feet, nor an entire building of micro-units,» said the firm.

The mayor’s office waived some of its zoning regulation to enable My Micro NY to be constructed. 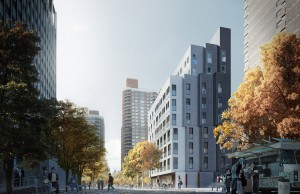 It will be the first micro-unit apartment building in New York and one of the first multi-unit Manhattan buildings featuring modular construction.

This website uses cookies to improve your experience while you navigate through the website. Out of these, the cookies that are categorized as necessary are stored on your browser as they are essential for the working of basic functionalities of the website. We also use third-party cookies that help us analyze and understand how you use this website. These cookies will be stored in your browser only with your consent. You also have the option to opt-out of these cookies. But opting out of some of these cookies may affect your browsing experience.
Necessary Siempre activado
Necessary cookies are absolutely essential for the website to function properly. This category only includes cookies that ensures basic functionalities and security features of the website. These cookies do not store any personal information.
Non-necessary
Any cookies that may not be particularly necessary for the website to function and is used specifically to collect user personal data via analytics, ads, other embedded contents are termed as non-necessary cookies. It is mandatory to procure user consent prior to running these cookies on your website.
GUARDAR Y ACEPTAR